It’s not hard to find at-home entertainment these days. Every time you open Facebook, Instagram, or YouTube, it seems that another artist is planning an at-home live concert, and with live music venues closed for the foreseeable future, this is how we’re going to have to enjoy performances for the time being.

As important as these live-streamed concerts are for those of us who are self-quarantined at home, they are even more vital for the artists themselves. While we tune in to feel less alone, the musicians are working, and this may be the only work they have for weeks, or even months. So while we enjoy the plethora of online entertainment options available to us, we also need to make sure we’re supporting the people who are creating it. If you watch a live-stream of a local musician, send them $5 on Venmo or PayPal, if you can. Buy their merchandise or become a patron on Patreon. Pay attention, and they will tell you what they need.

Many of the recurring online concert series that I’ve compiled for this post are also fundraisers for other worthy causes, including providing COVID-19 relief across the country. Please consider donating to these causes, if you can.

Now, I have to start things off by mentioning The Grand’s new virtual happy hour concert series, “Quaran-Tunes.” We’ll be featuring some of our favorite artists, many of them local and regional performers who have played on our stage in recent years, twice a week. You can catch the first “Quaran-Tunes” concert, featuring our friend Nick Anderson of Nick Anderson and the Skinny Lovers at 5:00 PM on Thursday, April 2. Please consider donating the cost of your happy hour drink either to show your appreciation to the artist for performing, or to provide COVID-19 relief in North Central Wisconsin. 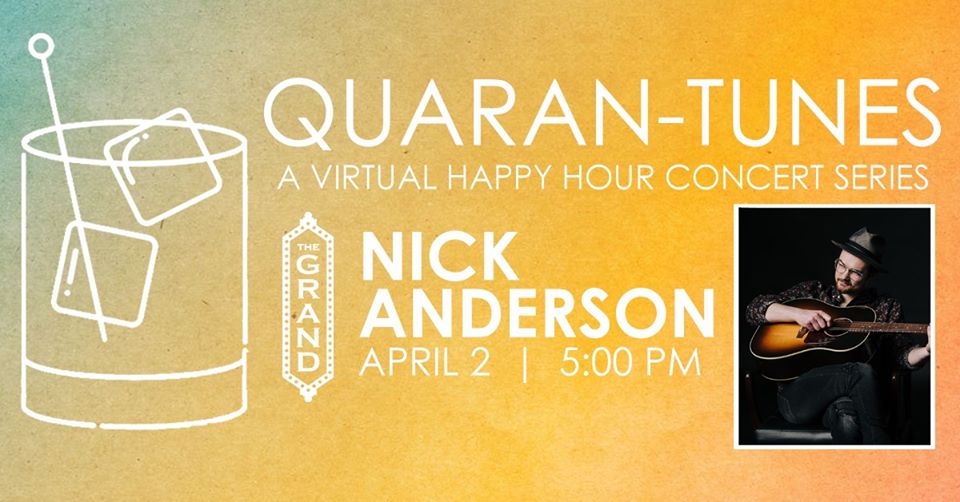 Check out some of these other major recurring online concert series:

If you STILL aren’t sure what to watch on a given day, I’ve found both this list from NPR Music and Vulture Magazine’s Instagram account to be very useful. Both channels are updated daily with newly announced concerts and other streaming entertainment options.

And, especially during the next few weeks, make sure you’re following your favorite local and regional musicians on social media. This is likely where they’ll be announcing online concerts, and it’s where you’ll be able to support them and the causes they care about!