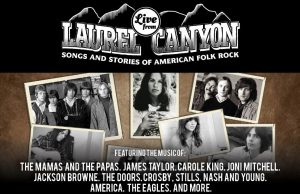 Live From Laurel Canyon – Songs and Stories of American Folk Rock is a journey through a very special time in American popular music. A time when an entire generation of youth felt abandoned by their own culture and were searching for a sound that helped define them; a sound that shared the protest and awareness of folk music and the attitude and look of rock music. Join us as we look at these legendary artists and share stories on how they ended up in the Canyon, and how this neighborhood of like-minded artists influenced the music that was created.

THE STORY: THE BIRTH OF A ROCK & ROLL NEIGHBORHOOD
Laurel Canyon is located in the Hollywood Hills of Los Angeles, CA. The Canyon housed artists as early as the beginning of the 20th century as major motion-picture companies set up production around Los Angeles. It became a sort of de facto artist community as the entertainment and nightlife industry grew. Musicians especially enjoyed the rural feel and seclusion the canyon provided, but also its proximity to the night life on Sunset Boulevard and beyond. Fast forward to 1965, when our story starts…
Follow the twists and turns of the side roads off Laurel Canyon Boulevard between 1965 and 1975 and you’ll find some of the musicians who redefined American Popular music and and inspired the “LA Sound” of the early ‘70s, artists like: 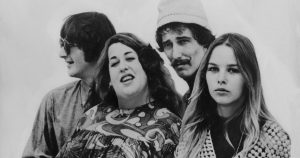 The Mamas & The Papas
In 1963, Folk singer/songwriter John Phillips and his wife Michelle were still living in Greenwich Village in NYC. The duo eventually became a foursome with the addition of “Mama” Cass Elliot and Denny Doherty, and moved to LA, where their first big hit was released in 1965.

The Byrds
The Byrds became stars overnight and gave a young David Crosby a taste for fame. Crosby was eventually given the nickname “Lawrence of Laurel Canyon” by his bandmates.

Buffalo Springfield
Stills and Young immediately put a band together and everyone moved into Stills’ manager’s house in the Canyon and began rehearsing. They called themselves Buffalo Springfield, a name they took from the side of a steamroller parked on the street. Their first gig was at the Troubadour less than a week later. 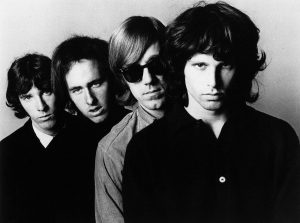 The Doors
After his sudden success, Morrison moved into a little apartment in Laurel Canyon on Rothdell Trail across from the Country Store – “the store where the creatures meet,” as he sang in “Love Street” – and invested in a custom-made black leather suit: behold the Lizard King.

Joni Mitchell
Ladies of the Canyon, Mitchell’s third solo album, was released in April of 1970. This album featured a more pop-oriented approach to both Joni’s writing and production; a step away from the sparse, folk production of her debut album.
James Taylor
In July 1969, Taylor was introduced to the Laurel Canyon scene when he did a six night stand at the Troubadour. Soon after, Taylor moved to LA full-time and began work on his second album, Sweet Baby James, which thrust him into the spotlight. 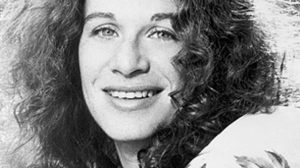 Carole King
In 1968, after divorcing her husband, King decided to move her two daughters to Laurel Canyon and work on her own material. Her second album, Tapestry, held the No.1 spot for 15 consecutive weeks, remained on the charts for nearly six years, and has sold over 25 million copies worldwide.

Linda Ronstadt
At 18, Ronstadt moved from Arizona to LA to form The Stone Poneys. After releasing three albums in 1967-68, the band broke up and she began work on her first solo album. Hand Sown … Home Grown is considered the first alternative country album by a female recording artist.

Here the music of these artists and many more with Live From Laurel Canyon! Tickets are still available for this Friday’s performance! Get yours today at The Grand’s Ticket Office or online by clicking here.